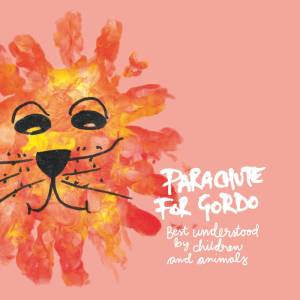 🏴󠁧󠁢󠁥󠁮󠁧󠁿 Is this a lion or a sun? Children know better. British trio Parachute For Gordo is here to bring their message to a wider auditory. Our blog included!

Parachute For Gordo band is Laura Lee – (guitar, keys, and production), John Harvey (bass), and Mark Glaister (drums, production). They are around since 2012, hailing from South England. They have successfully issued three albums themselves, and the time for a professional one has come now.

“Best Understood by Children and Animals” title refers to Igor Stravinsky. It’s a kind of motto explaining that something complex in the core may sound intuitive. Not sure though that children would listen such a mature rock, I would say it is rather for they parents.

I need to mention that this nice picture is done by bassist John’s daughter Beatrice. Nice fact that fits the style of the record which is light and mathy in the same time. It’s a great and not so often occuring case when math rock is easily percepted and… best understood by children and animals!

You may also be inspired by Monsieur Thibault | Tricot | Xeaoxa