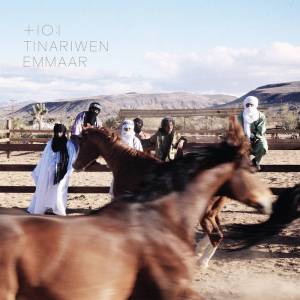 🇲🇱 Today we arrive at the musical oasis where Tuaregs tell their story besides a campfire – long story of life and strength overcoming war and despair. Tinariwen invented and have been improving desert rock for that.

Tinariwen (or ⵜⵏⵔⵓⵏ in Tamashek language) is not only the name of a band started by Ibrahim Ag Alhabib and friends. It’s world-recognized movement being around since late 70s. Their caravan crossed terrains and even continents bringing live concerts and shows.

During these years, Tinariwen succeeded with a bunch of albums, each of them deserves good listening.  They got Grammy award for “Tassili” issued in 2011 and the latest for today, 2017’s “Elwan”, is beautiful record reaching the top of sounding. Frankly, I picked “Emmaar” only because it’s the one currently available for streaming via bandcamp. (Below you’ll find Spotify tracklist with the latest band’s compositions).

Hailing from Mali, Tinariwen have been ambassadors of human rights defense and freedom. Representing nomadic culture, they sing about the motherland, everlasting Ténéré, which has been suffering violence, and rebels that were severely punished.

Get this album via: Google Play | Apple Music |

You may also be inspired by: Tamikrest | Studio Shap Shap | Sedaa.